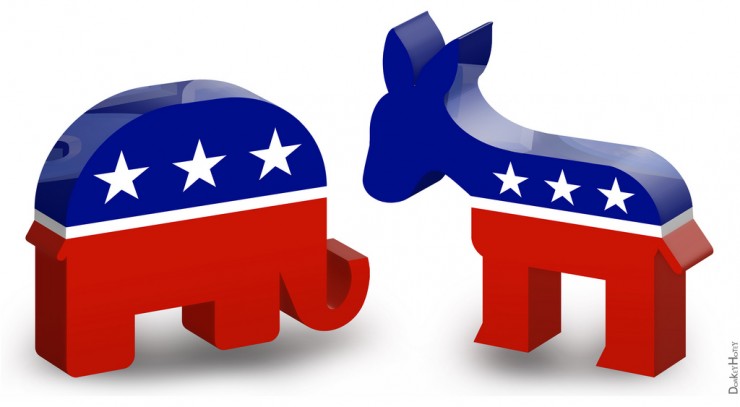 My dad was a New Deal democrat. He had a spate as shop steward at his factory before me and my sibs were conscious. He filed a grievance after he was fired for taking the day–not the whole day–to bring my mom home from the hospital. She was in the hospital to have a baby. Me. He won. For the other guys, too.

I remember him saying that the union should negotiate for a new dental benefit–of which I begot my straight teeth–rather than incrementally higher wages. He thought he was paid well-enough and that the real value of organized labor was ensuring that his family had access to the tools of good health. He was also for the vision plan.

He worked at the forge plant. In Hamtramck. His toughest days were those days when he had to put out fires. Literally. He’d come home smelling of burning factory with a bit of ash on his cheek as he made his way to the shower. On days his relief didn’t show up, he had to stay at his post. He’d work a double. He couldn’t leave.

He’d get two days off in a row. Each week they would slide one day over so once in a while he’d have a “weekend” off. Weekends weren’t a big part of our family life since the school weekend rarely coincided with his work weekend.

Every fifth or sixth week–I don’t exactly remember but I had it down pat when I was negotiating hard to schedule a trip to Cedar Point–he’d have three consecutive days off. He worked every Christmas Day that I can remember, except one. The calendar dice didn’t roll that way. He did get double time for our troubles. Oh, and he was the only man at ballet class. Again, literally. The only. He took me every week. Sometimes twice a week.

My dad lied to get into the Navy. He said he was older. He was as much looking to sow oats, of the wild variety thank you very much, as he was to serve. He did both. With distinction. His tats displayed ports in Panama, Honolulu, Manila, Cairo and Cyprus. I never asked him if he sailed through the Suez Canal. I’m thinking about that scene when Lawrence of Arabia looks up from his dusty desert journey to see a ship floating out of the sand. I bet Dad rolled through those sandy straits on a U.S.N. boat. I betcha.

He didn’t talk about his service. I know he did a small stint on a sub, which he hated, and once, offhandedly, he said something that made me know that he knew what embalming fluid smelled like.

After the Big War and a stint stateside after he married and after his discharge, he joined the union.

My dad was also a Reagan Democrat. He had no love for a naval officer nor for a peanut farmer. He was frustrated by an awful economy. The auto companies were on life support. There was a steady exodus to the south for jobs. Jobs with less pay, no benefits and no security. He felt betrayed by his union, was adrift from their agenda. He was offered  a buyout deal to get rid of the guys with seniority. To replace them with lower-waged grunts without the same protections.

He took his decent pension. He took his terrific health benefits. He asked me to look at the agreement because he thought my mid-college educated opinion had value. Any value from that request accrued to me. I didn’t add anything to his thinking, since I agreed with him, but he catapulted me into a new part of my life that was grown and independent and validated. Because my Dad believed in me enough to ask my opinion on something important to his life. Jeez.

Reagan spoke of resolve, of strength and of the promise that is America. My dad didn’t care about taxes. He did care about the U.S.S.R. He was susceptible to the racist dog whistles of busing and welfare queens with big TVs. He cared most about our future. He saw the solutions for that future through the lens of the past.

I railed against his wrong choice of candidate and party with the fervor of a young idealist at the beginning of life’s trail. He respected my disagreement, and we were never disagreeable.

He voted as Dad (R-MI) for Reagan and Bush 41. Then things got a little murky. I don’t know for sure when he started voting D again, but I know that he voted for John Kerry over George W. Bush. He was cagey about his vote for Al Gore, but based on his disgust over the hanging chads and the results, we think he pulled the D lever. And I know without any doubt at all that he thought that George W. Bush was an idiot. I have no doubt because he told me. More than once. Frequently using colorful language that would crack me up.

I would call home and he’d pick up the phone. We’d exchange a few pleasantries and then he would go full tilt into current events. Not conspiracy crap. Not anybody’s party line. Nope. He would read the newspaper (I don’t know how given he was mostly blind) and listen to the radio and watch multiple newscasts, including the Sunday morning public affairs shows. So he was always well informed. And he had a definite point of view.

I loved how he’d get riled up, and we’d get a good exchange going. Then, in the background, I’d hear my mother shouting, “SPOUSE! SPOUSE! What are you talking about? NOBODY cares about what you think.”

She was wrong. I cared very much. He kept me plugged in to where I was from and provided an analysis that I could agree or disagree with, but was an articulation of one American’s legit point of view.

She’d grab the phone away sometimes, just giving me and Dad enough time to share our I-love-yous as the receiver left his hands. But I’d get to talk with him next time, likely the next week, and we would continue. I would just say George Bush to him sometimes. It was my trigger to get him going. I was never disappointed.

My father never had the experience of watching Barack Obama run against Hillary Clinton during the 2008 election. My last discussion of national polictics with him was in early June of 2007. I don’t know if he would have cast a vote for our first African-American president, but I really believe that he would. Because of how I know, I mean knew, him.

I’ve been thinking about my Dad a lot during this presidential campaign dirge. Mostly, I’m thinking WWDD? What would Dad do?

Would he be enraged and engaged with Trump? I don’t really see any of the other Rs inflaming his fancy, but there are some parts of Trump that might appeal to him. Would he settle on Hillary as a solid, but flawed, answer for the next four years? I can see him eyeballing Sanders, especially his fervor over Wall Street largesse, but it’s hard to project him as a Bernie Bro.

I use my Dad as a lens to understand good people that I may disagree with. It’s not really right, though, because I can’t stop seeing his depth of field colored by my own focus through my memories of him. My view of him limits how I can use his view. It’s like a hologram of Tupac singing with Snoop, you can literally see through the facade. Or maybe it was just all a dream, an interpretation.

I’ve been thinking about this for months. I’ve created scenarios and opinions that may not be supported by the historical evidence. Maybe me using him, how I contort him to be my representative of a smart, white, working class man, may be simply ridiculous.

And, if I’m perfectly honest, I just might have to say that I don’t actually know WWDD. But I bet it’d be interesting to find out. Damn. I wish I could find out.