He walked up to her with an overabundance of confidence. He knew appearances count. He cleared his throat. To no avail. She did not turn.

He cleared his throat again, this time using her name as he forced a grumbling sound through the back of his throat. She spun her chair around and looked up at him. Her face asked, “what?”

“Hi. Hi, I’m sorry, but uhm, I got permission on Monday to take administrative leave today so I can register to vote. I can’t come to the mandatory workshop. I need to go because they close at 4:45 p.m. and I need to go home and get {something} first. And {something something},” he went on a bit more.

She wasn’t listening. She wasn’t sure why he was there. Blathering on about something when she had less that twelve minutes to get the worksheets printed, gather a pile of laptops and spread them around the room upstairs.

Then she heard that he had to register to vote.

He soldiered on, not letting his confidence drop. At least not too much. “Well, it’s too late to mail in my forms.”

She was messing with him now. “Sure, but why aren’t you voting in your home state? It’s a more meaningful state for you to vote in.”

He went on by quoting some laws by their numbers and names.

“Well, I know that you can register on voting day.” The man in the next cube stood up and chimed in.

“Yeah. You can register on voting day.”

Some of his swagger was leaving him. This getting time off this afternoon was getting more complex.

“Look, I want you to vote. I’m just curious why you think you need to register today, in person, at this one office in particular?” She was just toying with her prey who started to spew additional nonsense legalese. Nonsense because he was a distraction she didn’t need at this moment, yet she felt compelled to bat him around.

She let him squirm for another twenty seconds. “Are you looking for my permission to skip the workshop?”

“Fine. I need to finish something up. You can go and register to vote since you said your boss already cleared your leave.” She really did not care, not a single bit, if he showed up to her thing. “I just want you to know, that today is not a deadline.”

He started to respond with more jibberish, but she had already turned away to finish what she had started. She only had nine minutes left. His scheming had all been unnecessary. She was indifferent to him. “Just leave already,” she thought. 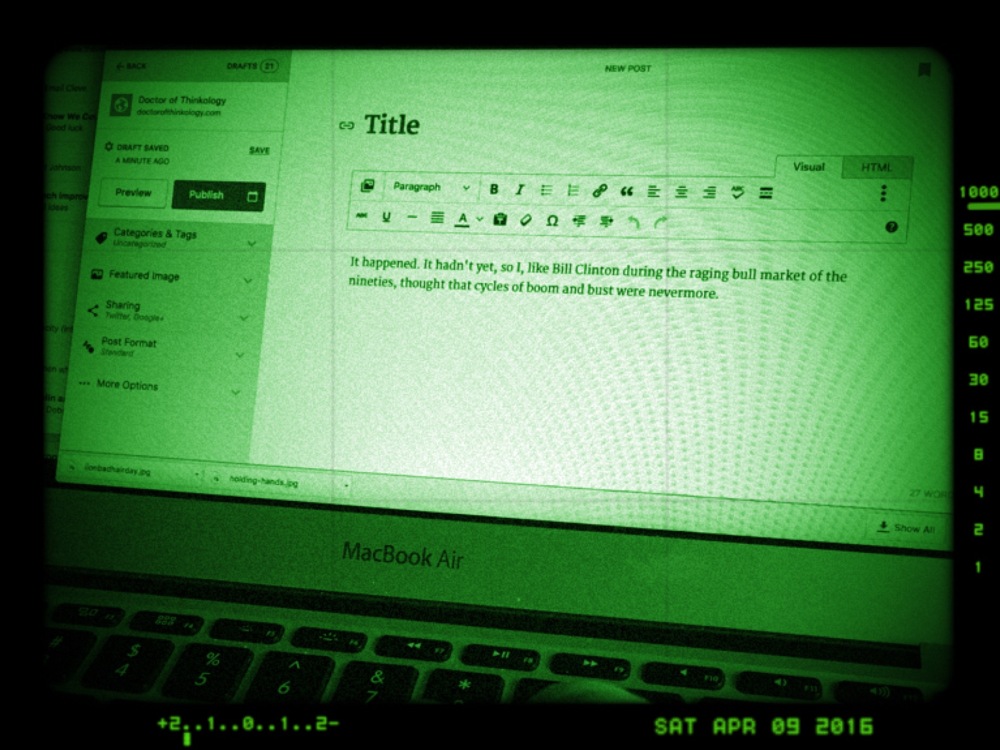 It happened. It hadn’t yet, so I, like Bill Clinton during the raging bull market of the nineties, thought that cycles of boom and bust were nevermore. Simple hubris. I am a fool. The rules of the world do apply to me.

The thoughts that became words that fed my keyboard that populated the screen that had formed Thinkings with little effort became thoughts that rushed then halted in disconnected sentences and fragments of sentences.

I look at the three shapeless sets of paragraphs and partial graphs in my notebook, and three stubs that I typed into this platform, and that total gimmick that I posted to fulfill my promise of publishing. Every. Stinking. Day. Even as that “achievement” was a technicality dressed up as cleverness. (The Big Guy said it wasn’t even clever. He’s right.)

I rejected a haiku. I’ve posted haiku in desperation before. So please know that the reject was of a truly unacceptable combination of syllables. An affront to 5-7-5. Even as a cheat it wasn’t publishable.

I may not have rejected it, or at least worked harder to make it acceptable, except that nothing was working. Publishing that sad haiku amid a rash of other weak Thinkings? The good can’t compensate for the bad if there is no good. You can’t average up. My craft, in its current disheveled state, might be devolving to a bad Tumblr of “funny” gifs where you substitute gifs with cheap writing tricks. After riding high, my writing wave was on a downward trajectory. The boom met the bust.

I had been planning a self-congratulatory post tomorrow, on the occasion of what was to be my one-hundredth post this year. As if, somehow reaching a fake milestone was the goal. And, in order to make that happen, given that I failed and did not write yesterday [this is not entirely true since I committed 213 words to screen among two limp threads–but I again digress in my digression], I would need to create TWO posts today. And back date one so I don’t miss a day. And I could crow about my achievement.

As if you care at all about that, Loyal Reader. As if you have a calendar in front of you placing X’s on the days that I publish. As if you are even reading this now!?!

I confronted myself with this chicanery. I realized that calling it chicanery was another parlor trick to avoid identifying bullshit backdating as what it is. Dishonest. Oww. That hurts. Yet, I believe that if I am writing, if I am exploring this form, that I need to be honest.

So, I failed in publishing. Every. Stinking. Day. I’m okay with that. I lost track of the point of this exercise. I’m not trying to sweat through every step of a marathon to prove that I can do it. Because, really, who the hell cares? See above.

What I am trying to do is to take those thoughts in my head that have been begging me to flesh them out–seriously, they beg me. I’m trying to punch them and knead them until they achieve coherence and can be expressed and delivered. The point is to spend some of my time creating and not just consuming. The point is to practice so that I can create better.

To  build my practice, I sometimes have to force myself to grasp at vapors of ideas and try to make something. Ideas that were not begging to come out and are just vehicles for the work. And sometimes, I won’t succeed in achieving coherence. But that makes me better. Unless I cheat.

My 100th-day reflection arrives a day early and a post short. It’s not the self-congratulations that I envisioned on day 83 when I spied Day 100 in my sights. Instead it’s a tale that recognizes a wretched fail just two days before that marker. Except that that marker is meaningless and that fail therefore is, too. [Thank you 4th grade math and the Transitive Property of Equality.]

I’m thinking about you, Loyal Reader, too. Thanks for playing along.