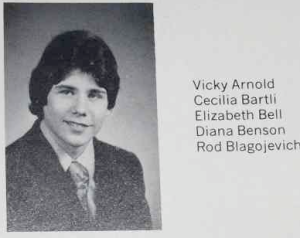 Yes, here is the Foreman High School class of ’75 photo of that thug-Governor of Illinios, Rod Blagojevich. He really is the worst of the worst of political corruption. Creepy.

I look at this guy’s picture and I can almost hear him say “the Senate seat is a f-ing valuable thing, you just don’t give it away for nothing.”

And what an idiot. Knowing he is under investigation he still can’t keep his mouth shut and spouts this crap over the phone? First-class stupidity or supreme arrogance? Oy! How do we elect such people? Oops! Almost forgot, being smart works against candidates for a part of the electorate.

I hope that Bluto / Blago goes to jail soon.

One thought on “Portrait of A Thug As A Young Man”