My office is a block and a few steps from the subway stop.

I say this because the office isn’t on the same block as the stop. You have to cross a street. The stop itself is like an eighth block in from the corner, so when I get out, I walk the most of the block, then cross the street. It’s about a quarter of that next block to the entrance to my building.

Seems like a block and a few steps to me.

If I’m prompt to work, cars whizz by on all lanes. It’s more likely that I am less prompt. This works out great because I can peruse the food trucks that line up as soon as the rush hour parking restrictions lift.

Overall, I am NOT a fan of the food trucks. First, they aren’t any cheaper than building located restaurants and sandwich shops. You can’t pay less than $10 for lunch (except for the burrito lady with all the good salsas, but she has a cart not a truck and is down the block in the other direction, so I stand by my ten bucks).

Second, they were supposed to be a response to lack of variety in food vendors. The variety though, consists of kebabs, Indian food and tacos/burritos. That might seem like variety, but if there are eight trucks lined up and 3 are gyros and 2 Indian every day, I’m missing the variety.

Third, where do you eat your truck food? On a nice day you can sit by the fountain–depending on how loud the guy by the elevator is arguing with himself. Even then, you have to balance whatever you’re eating on your lap. You can’t put your fork down. You can’t keep your soda within arm’s reach. Heaven forbid there’s a little wind and your bitty napkin gets blown away. The solution to these struggles is worse. If you won’t/can’t perch outside, you’re sentenced to taking your sad styrofoam container back to your sad little desk. Sad.

Why am I even looking at the trucks since I hate them so much, you ask? Good question. I guess I’m just shopping for that amazing bargain with cafe seating. Enough food trucks. This isn’t even about them. 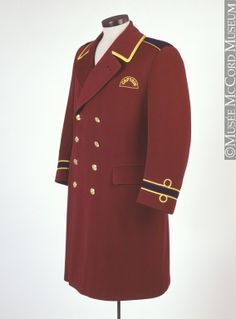 It’s really all about walking past the Washington Marriott at Metro Center. But really much more about the men who call the cabs.

The men on the outside are all tall. Some are thin. Some are not so much thin. But they all wear these amazing red coats.

The coats look very lush, like big wool that isn’t too heavy. Not like these guys couldn’t easily wear a heavy and unwieldy wool. But the coats they wear seem more fluid.

The wear red pants, too. And have very jaunty and amazing caps.

I get how they wear that for their patrons. They earn tips. So they expertly bring in the cabs. They empty out the limos and ubers and Super Shuttles. Today I saw a woman exiting from a cab and the bellman adroitly and subtly removed the winter coat from the woman’s arms, then her extraneous bag,  leaving her lighter and happier to stand there in her black booties and grey skinny jeans with a single black bag over her shoulder.  He took away her physical burdens by building trust. He did this in 2 seconds.

I walk by every day. In the morning–late as I admitted–and on the way back to the train in the evening.

I was walking back to the train this evening and walked back under the Marriott. It was almost raining, meaning that it was more substantive than a drizzle but less sustained. I was too lazy to pull my umbrella from my bag, so I hugged the hotel for my block and a few steps walk. There were awnings I could scurry under, and I looked forward to the big overhang by the main entrance, mostly because there is a heater that hangs outside. I always swerve to grab a taste of it’s heat.

I passed by the entrance and sauntered underneath the heater when one of the bellman walked towards me in his claret wool. The evening man is bigger–girth wise–than the morning lead.

We were on the same path, so I moved a bit toward the street as I walked towards him. He was tucking a scarf under his chin, against the almost rain. He looked at me and he shined a smile of recognition that made the rain away.

I guess we’re friends. We’re friends because we see each other. He recognizes my coat and my hair. He has, over the past few months that I’ve been at this office, taken me from the randomness of the people he sees on that street in his day and knows me.

Since we say hello every day and we know each other, he’s now my friend. And I am happy to see him, too.

One thought on “Friends in Red Coats”