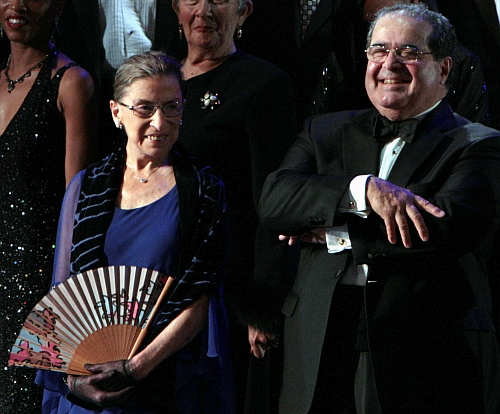 I  was shocked to hear that Justice Scalia passed away. I think we were all shocked.

Although I have not been a fan of his work from the bench of our highest court, my first reaction was a sense of loss.

I knew that he and the Notorious RBG were notoriously friends. In reading people’s memories of him, I learned that he and another ideological foe, Justice Elena Kagan, were hunting buddies. Scalia even recommended her to an Obama confidant–saying, “I hope he sends us someone smart,” before naming Kagan as one who met that criteria. I guess he wanted a worthy opponent.

Witty, gregarious, and fun are words that are most associated with him by colleagues and friends or various leanings–left and right, D and R.

I learned about Justice Scalia’s death on Twitter which almost immediately brought me the second shock. The Senate Majority Leader ran breathlessly to a mic within an hour to let the world know that our sitting President should not even THINK about nominating someone to fill that seat on the bench.

Then there was the line of people disagreeing with McConnell from the Senate chambers bringing politics to the fore before anyone had a chance to pay their respects. Turning the Justice into a political football.

Others started piling on saying mean things–really mean. And I all could think about was that I could NOT agree with any of them. At all. Because no matter how much I disagreed with Scalia, no matter how wrong I believed his skewed intellectual gymnastics on more than one decision or dissent, he always seemed to me to be very much human.

They say he changed the Court, that he was the first to really take control of the arguments and ask challenging questions. He was a New Yorker. He was a first generation Italian-American. He was smart. He was confident. He was brash. He pushed his ideas but could obviously listen to others and agree to disagree. Without being disagreeable. I love this.

I’m not saying he’s a saint or that he should be revered. I’m just saying he might have been wrong, but he wasn’t bad. Just look close around him.

RIP, Justice Nino. Peace to your family and friends.