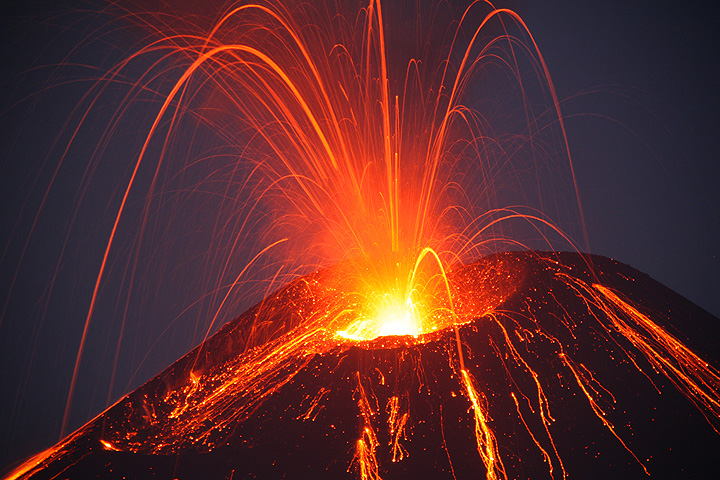 When my mom would get mad, she would use her words–occasionally at a deafening volume. Usually, though, just at an extremely loud volume.

I really can’t remember exactly how she would get wound up. In my memories, she could blow at any time. She didn’t go zero to sixty. She was more like a rocket launch, minus the countdown. Or maybe an exploding mountain top that exposes roiling lava in a crater. Perhaps there were some seismic gurgles or telltale belches of ash, but we were too young, and then too self-absorbed, to predict the eruptions. We weren’t scientists with well calibrated instruments. We were the simple natives that managed the fallout as it occurred.

My dad was the usual target, but when the moon was right, nobody was excepted. The moon was a character in the drama. Her blasts seemed to be tied to hormones. Dad would stand in the garage and warn us before we’d walk into the blast furnace, whispering that she had her period.

Once she was on, it could be days before it was safe. She’d be so primed that the slightest slight could train her sight your way. When she’d blow, we would be very quiet. Don’t poke the bear.

This day the Goddess of Yelling was present. I think Dad was mowing the lawn. We were goofing around in the other room. Since we were kids, and we heard it all the time, we could sometimes be oblivious to the conflict. When we were called into dinner, we brought our foolishness with us.

Mom was yelling at Dad out in the back yard. We were laughing around the table. I threatened My Older Sib with mashed potatoes on my fork. She laughed and loaded her own. She drew it back. I dared her with a raised eyebrow. Her hand slipped and the potatoes catapulted past my right shoulder and landed with a horrifying plop on the rug in the next room.

Horrifying in a way that spawns shrieks of laughter that we could barely contain–but we had to because Mom was walking toward us. But worse, she was walking in her stocking feet toward the potato landmine. Oh God, if she stepped in it, we would be dead. We started to giggle. She didn’t know why we were laughing but she was not happy. She turned her ire to us.

I am sure she asked, in her outside voice, why we were laughing. We, of course, could not tell her. We were both terrified and dangerously amused. One step to her right and she would find out for herself. She was so angry that she started to stomp from one foot to the other, like the angry troll underneath the bridge that the Billy Goats Gruff crossed.

The closer her small white-socked feet came to the potatoes, the more excited we got. Not in a good way and not in a way we could control. “What was so funny?!?”

Big Sib burst out laughing. She had a clear view of our mother and her foot almost touched the food. I turned around and desperately started a long tale of what happened at school. Something in this train of thought had to be funny.

Most fortunately, she wasn’t interested in my narration and the the mad-hopping slowed. She turned, and we held our collective breath as her foot hung in the air over the mashed potatoes piled on the carpet. Everything seemed to stop, except for the giggles that we had to choke back down to their origin. Do. Not. Laugh. It is almost over.

She moved her foot forward above and then past the floor food and stepped away. It was over.

I don’t remember where she went, but I know that we had to remain at the table until the coast was clear. A furiously whispered argument followed on who would defuse the bomb. Big Sib thought it should be me. Her argument was that it was my fault since I, in the parlance of children, started it. I, on the other hand, was sure that it was her responsibility since she was the one who lost control of her fork which was the actual cause of the almost-disaster. Bottom line, neither of us wanted to get caught while cleaning it up.

As was typical, we likely came to the solution of sending in the rookie–the Youngest Sib. The logic was that she was least likely to get in trouble. Mom, at that time, usually spared her the venom. In fairness, she caught her share years later.

So goes my story about mashed potatoes. You know how you grow up and sit around with your folks and come clean about your childhood misadventures. Didn’t happen with this one.