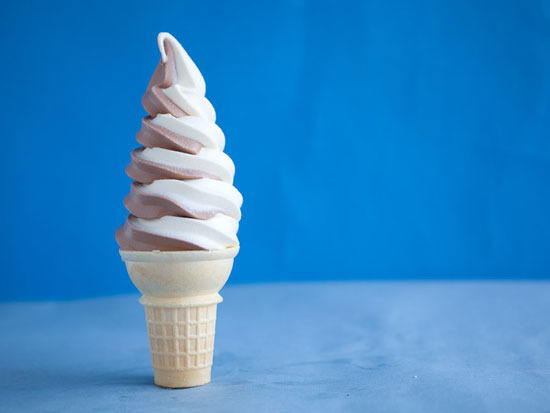 After laying in a tube for 90 minutes listening to the worst, anti-rhythmic EDM while getting my pictures taken, and after a better than average but not quite good and certainly less than awesome overhyped fast-casual lunch, I decided to walk back to the office. And get some ice cream. Not really ice cream, but frozen custard. It’s a form of soft serve, I guess. But creamier.

I was actually pretty full after my eden bounty of flash cooked greens–broccoli and green beans and snow peas and zucchini and edamame and bok choy–with quinoa and a pair of nondescript sauces. Maybe if they gave you only one sauce they would have concentrated on making it more worthwhile. Doubling meh is like multiplying by one. You don’t get less meh. You don’t get more meh. Just meh. At least there was sriracha.

As full of green as I was, a frozen treat was still appealing. And, if I walked the 12 blocks from the hospital, I could both walk past the custard shop and mitigate my calorie lapse. Perhaps not a full win, but dangerously close.

It was super sunny and super breezy. So sunny that it was sizzling on the sunny side of the street and so breezy that it was chilly–like zip up your sweater chill–on the shady side. I criss crossed the street to regulate my temperature.

At first, I thought I was walking on H Street. The city blocks look pretty identical near the World Bank, but I caught myself before going off course. I did have to cross back to the shady side, though, since that’s where the custard store was.

Was is the operative word here. I passed by a dive bar that is mostly in the basement except for the bistro tables they serve under a big awning on the sidewalk. The bar smells better outside, for those of you tallying at home.

Usually, just past the tables, there’s a sandwich board. It’s more like a siren’s song, enticing pedestrians to the call of ice cream. No sign. It wasn’t there. As I approached the storefront, it seemed dark. Because it was. All of the interior counters, machines, sneeze guards and menu signs were gone. Inside there was wood stained medium-brown, a chalk colored linoleum floor and a random piece of plastic tubing on the ground. Lights out.

I felt like this was a little bit right. I really didn’t have much stomach space for ice cream, so it was good.

Although, it was sad. Sad that the store closed. The custard was really good. In fact, it may have saved a life–that day that a bunch of the most stupid people who had screwed up in the most avoidable fashion and blew my deadline without a recovery plan? Yeah. That day I just pushed my chair back to avoid cursing them blue-black and stomped to the ice cream store and cooled down. Inside and out. Everybody survived. Although the stupids were terrified of me from that day forward. That worked, too. All I had to say was, “ice cream,” and I owned them all.

I powered on, past the empty treat spot. I saw the food trucks lining the square and craned my neck on the off chance there was an ice cream truck. Nope. Just the standard rolled in a tortilla or in a like-a-tortilla fare. I thought I had given up on my sweet urge, but I guess I was wrong.

As I stepped into the street to cross the next block, I remembered the by-the-pound frozen yogurt store. This was actually what I wanted–just a little bit of desert. It’s self-serve soft-serve. I could totally regulate. It was only a few steps further. I walked in.

The store should be a mess, what with all the shitty tourists coming back from the White House pouring and heaping and spilling with their distractions that created inabilities to steady their bowls underneath the spouts, but the staff kept it fastidiously clean. So impressive.

As I walked in and scouted for a container to fill, a six foot four inch patron with steel toed boots wearing a kevlar vest and carrying an exposed, but holstered, weapon was on his way out. He had more than filled his twenty ounce container. Strawberry juice and slightly melted soft serve were seeping from underneath the clear plastic top clamping down the wreckage of fudge and maple syrup and blueberries and chocolate chunks and flaked coconut topping the cheesecake and mocha cappuccino froze-yo. I asked him if he had enough. He was sheepish. It was supposed to be for two, but he admitted that he was going to eat it all. And say that he didn’t stop to get any.

Emboldened by his display of abundance, I surveyed my choices. Skipping quickly past the sorbets I saw not only frozen yogurt, but a dispenser of custard. Vanilla and raspberry on the far side. There was vanilla and chocolate yogurt that could be twisted on the near side. The fabulous man who was keeping the store scrupulously clean was also sweetly friendly. “Can I help you?” was his earnest question.

“No thank you,” I said as I spied the paper bowl. I picked one off the top and stepped to the chocolate yogurt. I knew what I was doing.

Placing the container underneath the spout I paused with my palm on the handle, getting a quick feel for its heft and resistance. I wanted just a smidgen and a mishandling of the handle would deliver the thud of a huge glop. I drew in a breath and lifted and then almost immediately returned the lever. Perfect. Now to the far side.

My preference is always for a vanilla to chocolate ratio approaching 3:1. The buttery fullness of the vanilla is best when punctuated by the sharper chocolate flavor. And the chocolate is smoothed and delicious-fied by vanilla. I raised the cup very close to the spout, I wanted the custard to concentrate itself on top of the chocolate.

Next I went to the corner with the toppings. Most, frankly, looked disgusting to me. Not because of their presentation–again, kudos to the staff. I looked among the nuts–shaves of almonds, raw walnuts, goopy walnuts. No. No. No. In the back I saw a bottle with chopped salted peanuts. Perfect! I shook out a few. I glanced across the two dozen bins until I saw the smushed Heath bars. I teaspooned a bit along the edge. Done.

My cup was hardly filled. It weighed and costed out at $2.52. That’s way less than a frappuccino. And then I added two drips from the ladle of free hot fudge. Napkins and a spoon and I was back on my way.

I really love peanuts with ice cream. I laced my spoon through the vanilla custard to add a dab of chocolate yogurt with toffee. After two more blocks I realized that the ice cream had exactly no flavor. It was just a conduit for the toppings with no added value. I looked into my bowl with the melted edges of the frozen-yo puddling at the bottom toward my hand. I wiped my lips and placed the napkins on top of the milk product. Three more steps and I found a cement encased trash bin.

So done. Two more blocks and I’m at my building. Done with the hospital, lunch and dessert and ready to settle in for a short workday.

You might think that between the bad music, the average lunch and the taste-free ice cream that it was a disappointing day. But, you’d be wrong.

Between seeing my favorite tech who willed me strength when I had my first MRI, trying a new fun place that inspires my own bowl making and being able to control getting just a little bit of sweet to top off my day, it was far from disappointing.

It doesn’t always have to be a homerun to be a fabulous day. You can win on a base on balls. Like today.

One thought on “Mine, With a Twist”