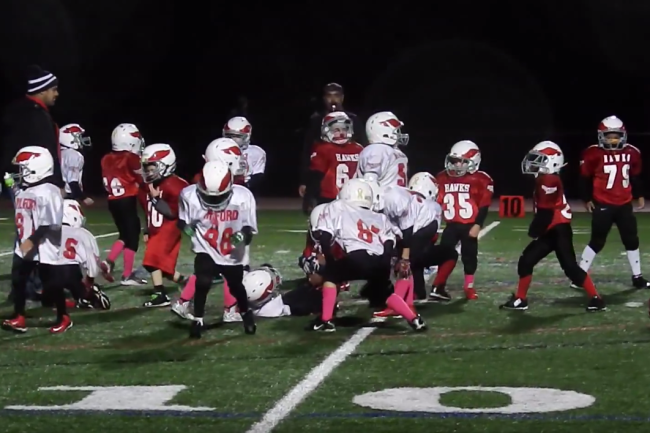 When I was a little Doc, my dad and I watched college ball together. The Lions weren’t much to look at so, likely out of his self-preservation, we watched Big Ten football.

I didn’t pay any attention to the NFL until after college. I only started watching because I casually knew someone who kicked for the Giants. So I became a Giants fan. It was a very fruitful relationship–the era of The Big Tuna and some rings.

The Big Guy didn’t play football until high school. The program was huge–80 or 90 boys would suit up for varsity on Saturdays. Pretty much every one of those boys thought they had a chance to play in the NFL. Especially as their school was nationally ranked, again. (I never got what that meant. Like ranked by who? What criteria? Who sees them? Damn system is worse than NCAA coaches poll. /rant)

There were probably 150 boys in the football program every year across freshman, JV and varsity. A bunch, well more than a handful, were recruited for Division I schools. Some started, many did not.

Most of the boys on that big high school team didn’t were never played a down in a game. It’s like they fielded a big team just to intimidate smaller schools. Many starters played both offense and defense. The Big Guy played on the scout team. Those are the boys who imitate the other guys during practice. Except you weren’t really allowed to hit the starters. And, you kept waiting for a coach to notice you. They didn’t.

The Big Guy would talk about how the first string would hit. How some were hesitant. How some were soft. The top ranked high school player in the country played with him. He said he never rang his bell. The kid who ended up playing for Harvard? That guy could hit. Or so I was told.

Sunday we saw Rodney on TV. The Big Guy ran the 4X4 relay with him. They played ball at the same time. Nobody thought that the little guy would be in the NFL. Eyes were set on other stars. And, yet, there he is. And the hundreds of other boys who played with him in Pop Warner, high school and college? Doing something else.

Rodney was playing for the other team, but I still kind of was rooting for him. You know you have passed into another stage in life when you see a big-contract NFL safety on TV and you just want to pinch his cheek. So I pinched the Big Guy’s sweet bearded cheek.