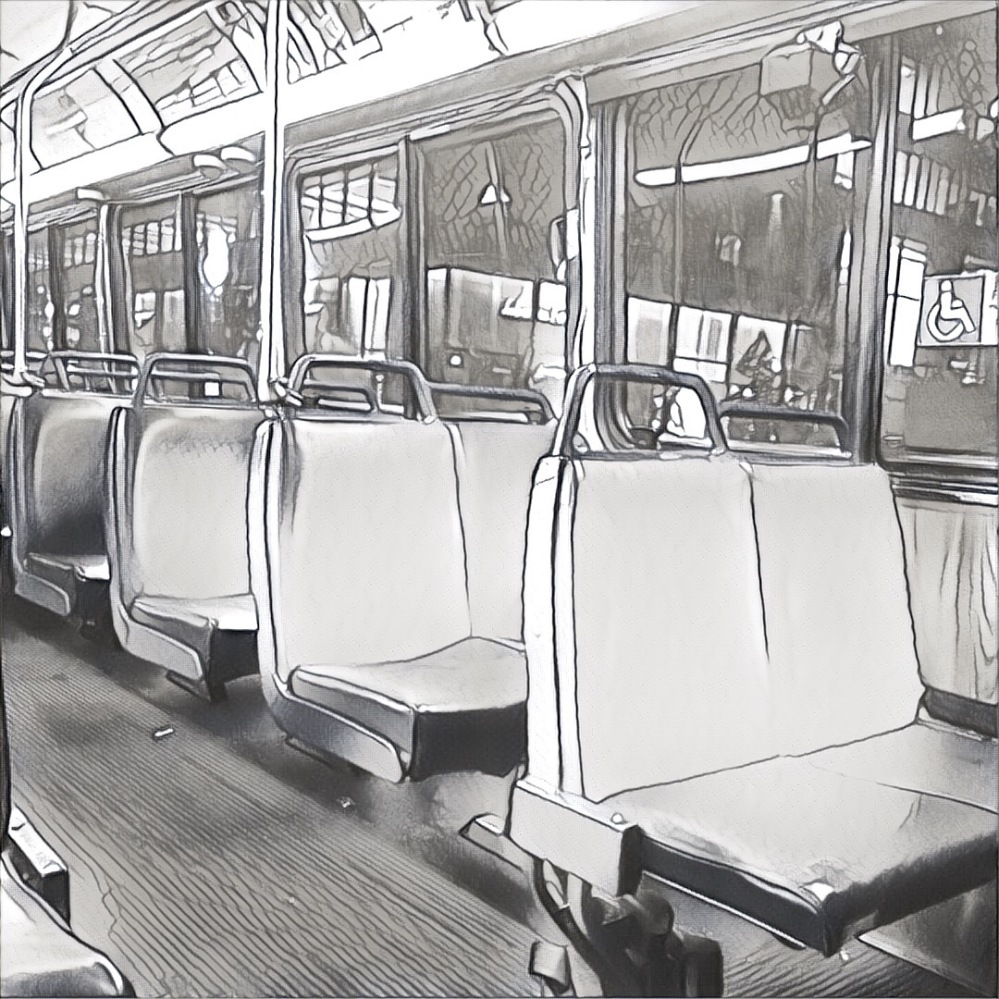 “Hey! Hey! Hey!” the woman shouted from the front of the bus. She was almost backed up against the massive windshield, pushed and pushing as four more people got on a bus that was overcrowded when the two got on the last stop and the family of four and a guy got on at the stop before that.

The bus driver was impassive and neutral. She was not interested in refereeing the soon to be melee. She was driving. She was not enforcing the “stand behind the yellow line” rule. She wasn’t asking passengers to make room. She was simply pulling up at the bus stop, pressing the gear to open the door and then shutting it when people stopped forcing their way on. She also did some high quality glaring until people paid their fares. That’s what she came to do. No more.

“HeyHeyHey, HEY-yay! Can someone give me their seat?”

There was that brief almost exchange among the other riders. In the mid-morning there’d be a discussion. The mid-morning bus passengers were a different group. They interacted. They told each other to sit down. They helped guy who was confused, one said he was a junkie, the other said you just didn’t know and couldn’t he use a hand?

The evening rush riders? Not so interactive. If you looked at someone you might be compelled to give up your seat and join the other bodies lurching fore and aft. Or maybe you’d make eye contact with that woman who was talking a stranger’s ear off. You just pushed your speakers into your ear canal, closer to your brain.

“I got a card that says I’m disabled. Somebody give me a seat?” She couldn’t see past the people in front of her so she couldn’t bore a guilt stare at those seated. Some seats were taken by parents with young kids. You definitely did not want the munchkins to be tossed around like doll babies. People sitting without kids looked around to see if they were in a more protected class than their seat mates.

“Is there not a GENTLEman on this bus?” The people standing between her and the seats were feeling a little salty. She seemed tired, sure, but they were, too. And they were cued for a seat via the universal maxim of “First come, first served.”

There was some shuffling on the benches. Space was being made. The law of firsts was getting upended. The woman with the disability card squeezed her way past the standing mom with her standing three kids, bulldozing the smallest of the them into other riders. The riders were close to falling into each other like toppling dominoes. All the movement compressed the commuting horde impossibly tighter.

“I’m sorry,” a short standing rider hidden by a hood directed her apology to the rider seated in front of her. They had inadvertently knocked knees. The seated rider was just below her eye level. Looking up she saw a pair of large brown eyes framed with long black lashes and a shy smile that barely contained her joy.

It was curious that on a bus packed with tired, cold commuters this one girl–maybe she was eleven or twelve–couldn’t help herself. She was simply happy. The knee-knocked rider smiled back and heard her sniffle. It was from the cold.

“Are you cold enough?” The girl smiled less shyly and bounced her head up and down in agreement. She held eye contact as they debriefed on the new cold weather. They decided it was colder because it came out of nowhere.

The bus turned another corner and started to empty. The woman who made the fuss to gain her rightful seat only sat in it for two stops. She pushed her way out as the girl with the warm smile disappeared into the humanity.

One thought on “Bus Sketch III”