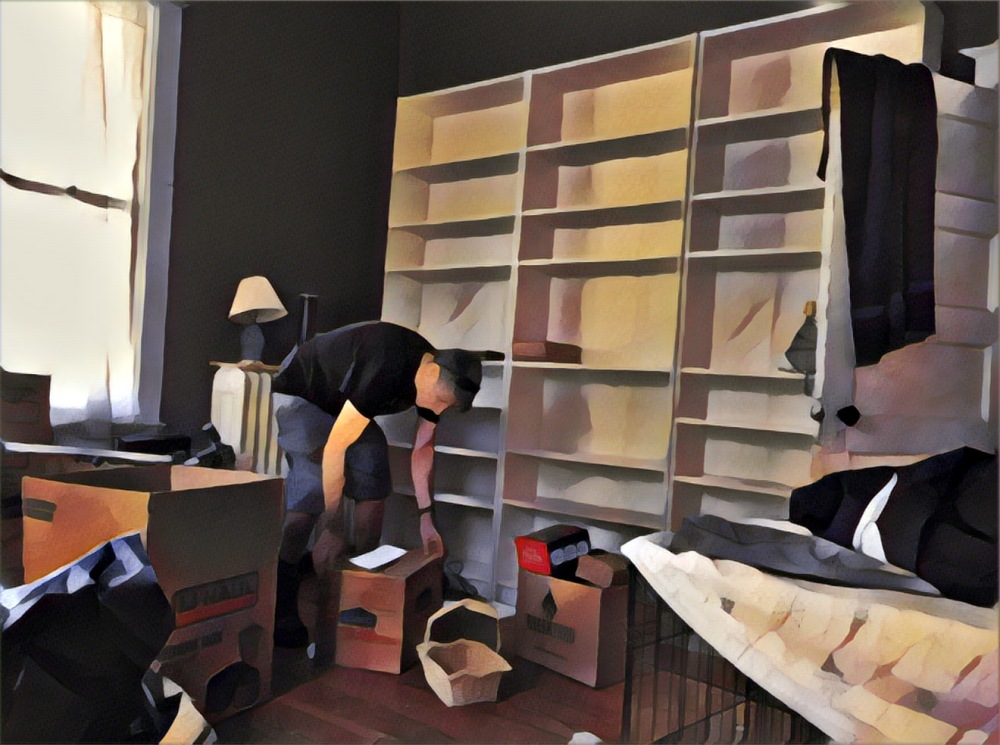 So, like these last couple of weeks have been full of whack. We were backed up against an immutable deadline–demolition. So we moved a generation’s worth of life out of the space it had occupied.

I fully recognize that I’m making a big deal of what others just manage without comment. But, I’m here to say those folks are just withholding. They might be outwardly strong, but this shit is real.

It’s not like packing up all of your worldly possessions accrued over a middle-aged lifetime is insignificant. But you’re correct in your impulse to say, “Doc, shut up. It’s just life. And you’re getting what you want, you ingrate.”

Okay. Thanks for the reminder and for your chastisement. I earned it.

But now here I am with so much that I haven’t told you. Not for lack of thinking about you. Not for lack of sentences that I strung together in my head without any tether. It’s that I’ve lacked the mental space to write. Since I’m a bit behind, I’m just gonna share some pictures. And some captions. Just to catch you up. 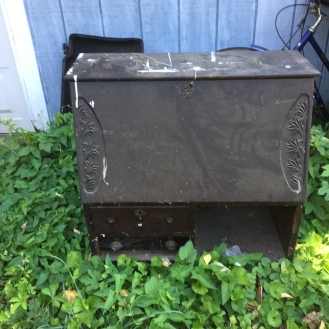 Above is a sampling of old crappy furniture that you can’t even give away. Except that there are always takers. I might have had to post online more than once, and there may still be some crappy junk furniture yet to find it’s forever home, but I can always put it out on the curb and send an alert to the listserve. Crossing fingers that someone doesn’t try and have me cited for illegal dumping. If all else fails, there’s a dumpster on the way. 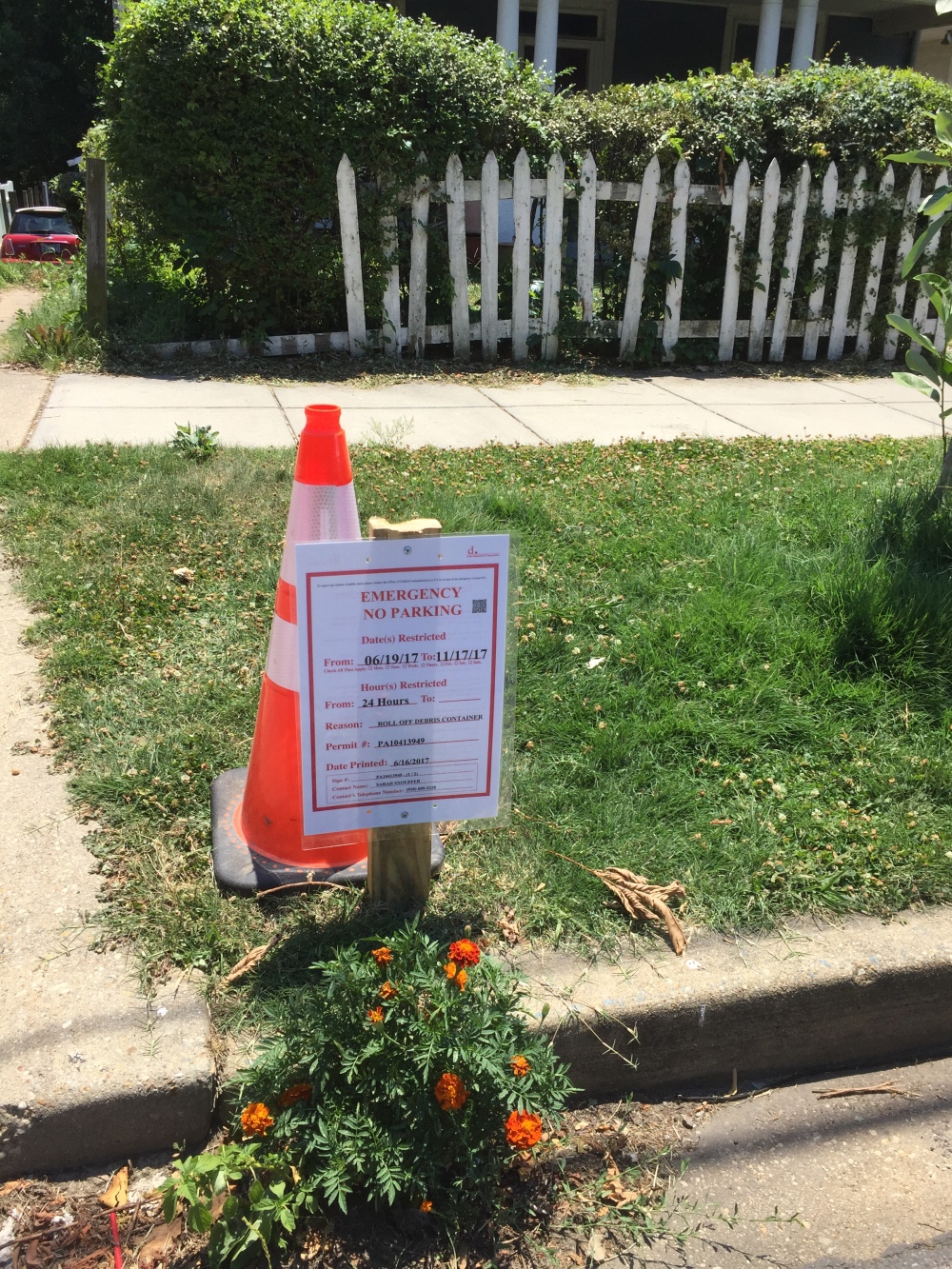 There was the day that I came home to find a pair of candy corn cones marking the spot that the dumpster will sit. It says that we have the permit until mid-November. That coincides with the hopeful move in date of, “before Thanksgiving.” Also, check out those wild marigolds that are growing from a crack in the street. I hope they survive the ordeal.

Truly a ridiculous amount of boxes. At one point I just started throwing items in and marking the boxes rando. 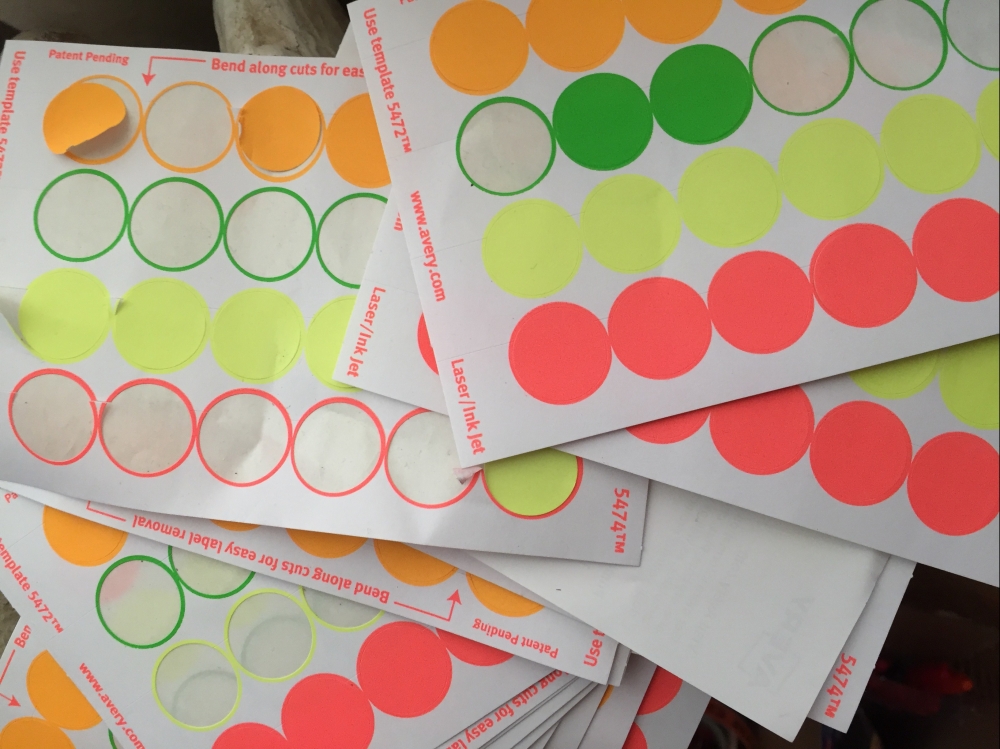 Now this, this was a piece of my genius. There were some items to go to our interim abode, some things–mostly furniture–to be stored in the garage, and others to go in the basement. I color coded everything. It was brilliant. The movers thought it was brilliant. I had to mark some of the crappy furniture with duct-tape and a handwritten “NO,” to keep the flow going. That helped kill the questions that slowed things down. I paid the guys by the hour, not the pound.

This is the moving truck. That is all. 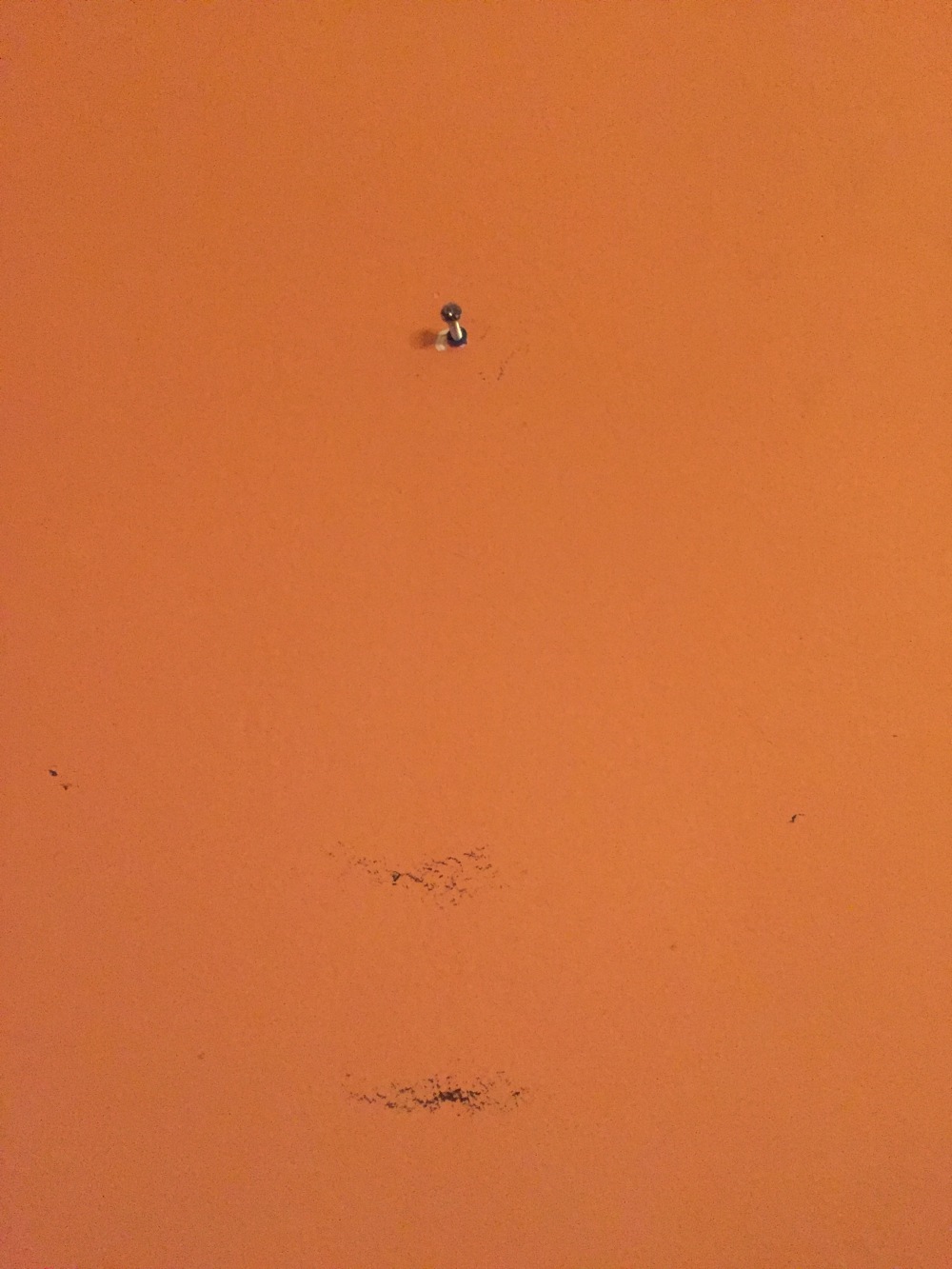 We painted the dining room walls this amazing terra cotta twenty-some years ago. I wanted to capture the color, and the nail that steadied the sconce for four candles. You can see where the sconce hit the wall. I saved the sconce. I don’t know if it will go back there. 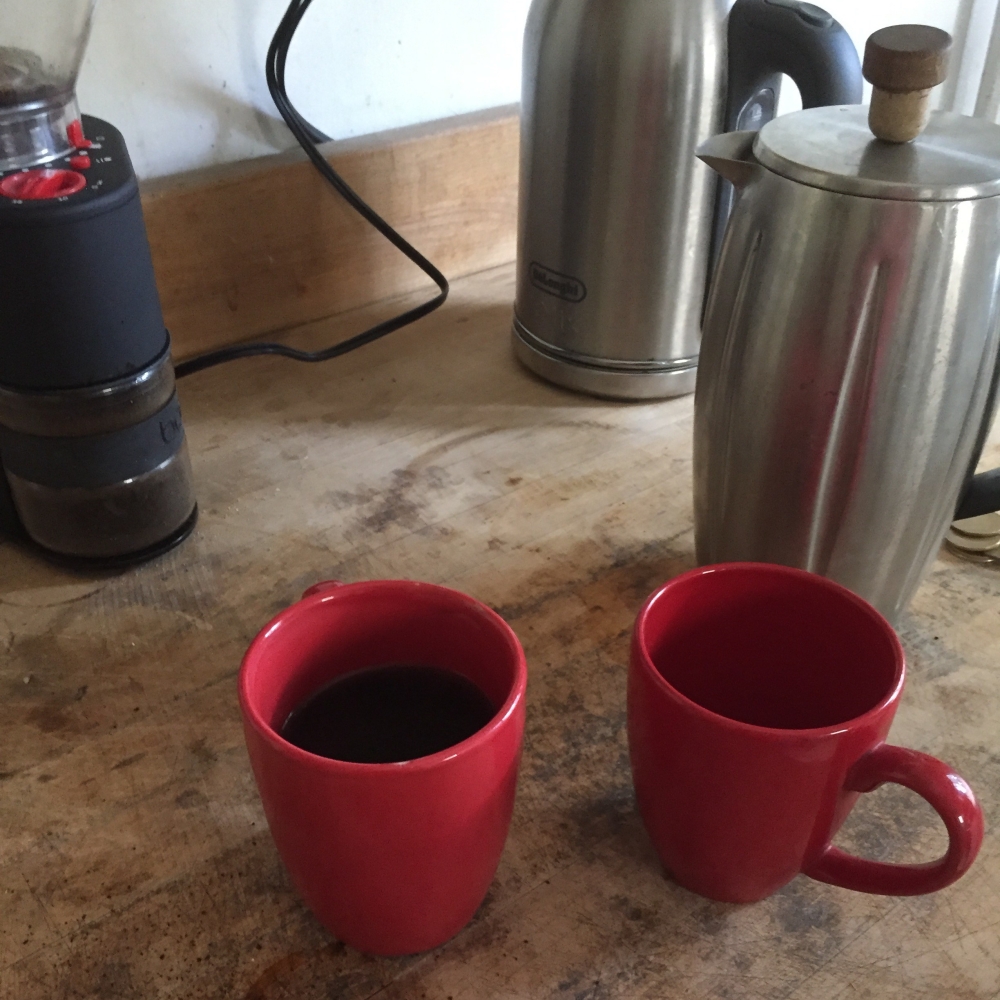 We left the coffee rig at the house when we moved. It was the last thing to pack. We moved the bed, and that meant no coffee. Since the interim abode is only one and a half blocks away, I figured I’d walk over there and make coffee.  But guess what? The Spouse went and got it. So I woke up to fresh coffee. This was the best morning.  I married well. 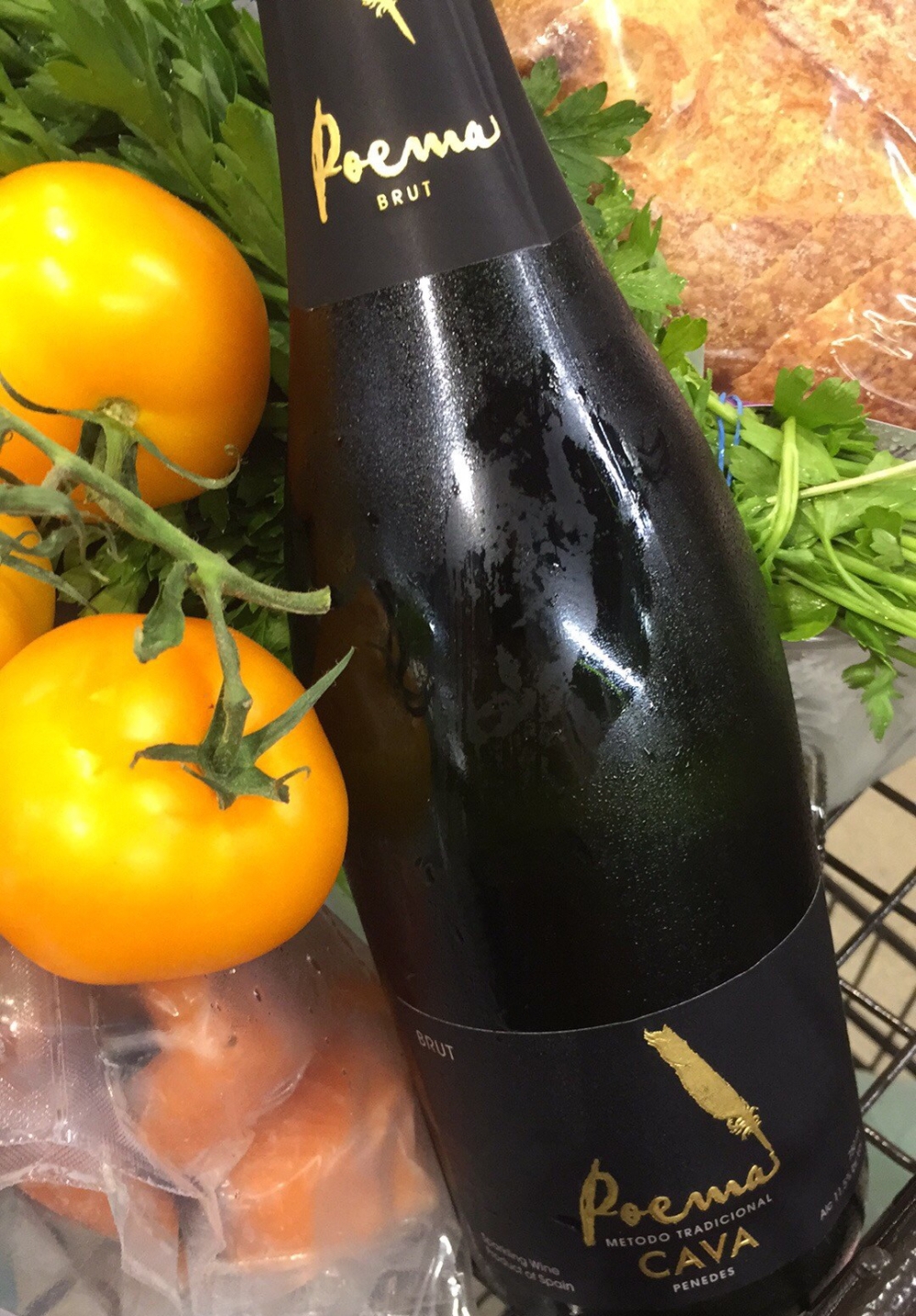 There was much eating out around the move. This was the first dinner I made in the interim abode. It was rice with minted peas and sweet, salty and sour chicken thighs. Oh, and, obvs, some bubbles. Celebratory and what not.

The Beast was a little worse for the wear during the move. But he found a chill spot on the floor at the interim abode. He kept an eye on everything because even though the movers came last Wednesday, we didn’t actually finish moving out until yesterday. Yes, a full week later.

It was at a point–or perhaps a few points that I may have made in a borderline hysterical tone–that I didn’t think we’d ever finish. But that’s what happens when you move. You lose your mind over the fact that you seemed to be almost done and then you weren’t. And you cycle through that again and again until you realize that the contractors are coming tomorrow. And then, it’s done. And there are things on the porch that will be picked up by Purple Heart and stuff that the person from the next neighborhood over claims to want and then the stuff that the city will take. I love the city for that.

And today, the front door was adorned with the signs of construction. Warning labels. EPA certifications–required in a house as old as ours–permits, and the posting of the nuisance fee that we pay the city because…dumpster. Just for the record, my neighbors don’t get any of that nuisance fee.

As I walked through the empty, echoing rooms, I didn’t know what to feel. I thought that I should feel a big emotion, yet I barely even registered relief.

So I found a random pink ribbon during my clean out and decided it would look perfect next to the random green ribbon that has been hanging from our door knocker for more than a year. The house is still ours. I’m feeling good.