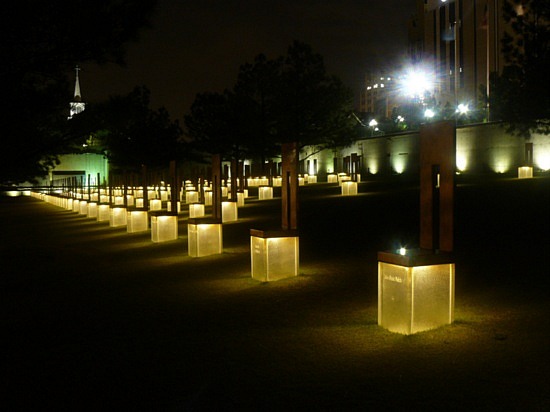 The day that the Murrah Building was bombed, I was in Kansas City.

You could walk by and watch the artists making Shoebox Cards–the funny cards–through a big window. Sometimes there’d be nobody at the desks. I guess they were on break.

When I went by that window, I was pushing a stroller that was full of a big fat baby Baby Bear. He was my traveling companion that first year of his life. He went from Boston at 10 weeks to Palm Springs at 10 months. There were two trips to Kansas City in between and maybe one after. There were likely six or eight other cities, too.

I took a new job when he was in my belly. I started on April Fools’ Day and he was born in the heat of August. My first foray into business travel with an infant was to Copley Place–I think it was a Marriott. There was some kind of pedestrian walkway there, too. My best mother-in-law ever joined me on that trip. She’d watch the Baby Bear when I was at the conference. I would ply her with the breakfast that I’d walk back from the Au Bon Pain–this was the olden days when their French roast was brewed strong and sweet, they had real cream and their bagels did not insult my New York MIL. We tried room service the first day and it was costly and crappy. Fresh coffee and bagels on the other hand, need I say more?

My assistant was in charge of shipping my breast pump. It was the size and weight of a significant car battery. My company paid the FedEx back and forth. It was cheap for all the work I was doing. Seriously. I carried the stroller on the plane. It came in handy when Grandma pushed him as she strolled downtown Boston.

We met my Bestest in Cambridge. We took the Green Line and transferred at one point to some old trolley car. We carried the stroller up the stairs of the old fashioned car, having to pause once or twice for an outburst of giggles or maybe it was hysterical cackles. This wasn’t the subway she knew in Manhattan and environs. It also bore no resemblance to the D.C. version of train that I knew. My Bestest was happy that we were city people and were up for the misadventure. My favorite part of the evening was strolling among the shops after dinner and finding the red telescope that The Big Guy wanted. MIL asked me if she could buy it for him for Christmas. I still have it.

By the time I arrived in KC, I had done a few solo gigs. My job took me to nice hotels and I’d find a sitter via the concierge. I bet I didn’t tip her well enough–but I also bet I mentally excused myself since I couldn’t expense this big expense. I’d go to sessions, give some presentations and build business during the day. I’d usually skip the socials. I didn’t need a glass of wine. Baby Bear was hungry. And I was mostly exhausted.

Did I tell you what a great traveler he was? People would see me get on the plane with a laptop on one shoulder and a fat baby and bright blue diaper bag on the other. Usually their faces would fall. Especially when they saw me edge toward their seat. The Bear didn’t cry. He didn’t fuss. He’d have his meal and read books with me, except when he was making friends with the person in the seat behind us. My neck muscles elongated like a ballerina’s as I looked over my shoulder at him and his newest friend(s).

The day there was “weather” in Dallas and we were diverted to San Antonio, we sat on the tarmac for three hours. After the first hour, the flight attendants let us all loose. They brought out those little bottles filled with fire water and dug out the remaining cold burritos to keep us happy. Other passengers were shocked that there was a baby on this hell-flight. Frankly, he was having a great time. Better than the ansty adults who entertained themselves by passing him around.

But on that day in April, we were in Kansas City. I didn’t know anything about big federal buildings and the regional fed hubs. That morning, I ordered room service and put on the TV. I didn’t have anyplace to be. I held Baby Bear close to me and sobbed. And sobbed. Downtown Kansas City was uneasy. There are plenty of federal buildings and nobody knew if their would be more attacks.

I put the sweet Bear in his stroller and we walked from one of the hotels, across the link and past the Hallmark artists and through the mall to the other hotel. I don’t know if we started or ended at the W-hotel or the H-hotel. But we went back and forth more than once. We stopped and looked through the glass wall surrounding the bridge. We saw very very wide and very very empty roads below us. I wasn’t scared, but I thought about it. Being scared, that is.

Mostly, though, I thought about those babies who would never grow up. But I couldn’t think about their parents. I still can’t. I don’t know if I could get myself out if I did. My Baby Bear is a young man. I weep for the parents who never got to know their babies as kids and tweens and teens and young adults.

But I can’t end on that thought. No. They aren’t the story.

I will thank the amazing first responders who walked into that horror. To the people of Oklahoma City who were almost all touched by this tragedy, I’m awed by your resilience. And to the families who lost so much, I am so sorry. Those who you loved so well are still remembered.

And a grateful hug to my Baby Bear. I am counting my blessings through a reprise of tears.