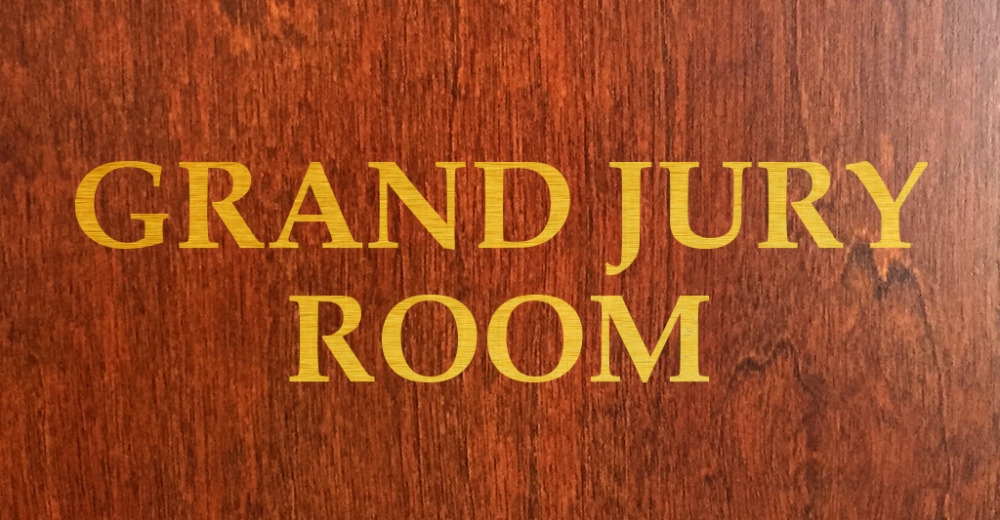 Twenty-one of twenty-three grand jurors were present. The jury room had two rows of chairs stacked theatre-style in a windowless room. The “stage” was below. There was a chair for a witness and a desk and chair for the court stenographer in the bottom of the bowl. Two juror chairs were empty. Someone was late and someone had a dental appointment.

The novelty and the importance–the grand part–of serving on the grand jury had long since passed for most of the jurors. They’d grown tired of the legion jump outs by police who would testify that they found a small plastic bag filled with a green herb-like substance that later tested positive for weed. Actually they always said marijuana.

They were weary of the multitudes of weapons charges. Each case included charges for carrying the gun (pistol in law enforcement vernacular) without a license and possesion of unlicensed ammunition, too. The jury knew the charge by it’s acronym, CPWL. The charge was read then repeated by the officer on the stand and then read again. If there were two weapons, the second weapon charge was read, repeated and read again, too. And, of course, the ammo charge. It was curious, and then annoying, that the same person was charged for unlicensed ammo on a per gun basis.

This particular jury, Panel 3, spent many hours having testimony “read into” them. This entailed a lawyer reading transcripts from interrogations in front of a prior jury that did not sit long enough to indict. These cases were murders and more complex investigations. Panel 3 did not end up voting on most of them, either. Toward the end of the Panel’s internment, the Assistant US Attorneys–that’s what they call the prosecuting attorneys in D.C.–would use them to get testimony on the record. And this evidence would become a new transcript that would be read to a future jury. Seems like the jury never got the entire story. Just a cog in the wheels of justice.

The Assistant U.S. Attorneys initially intimidated the jury. Ten days into their service, however, Panel 3 realized their powers. They were no longer cowed by the process. They learned that as soon as the foreman closed the door, nobody from the outside could open it. They were a secret citizens panel, and they might be talking jury stuff. Or they might just need to take a break from the never-ending repetition of drug and gun cases. Yes, once again, there was enough evidence to indict. It’s a low bar. Yes, already. And again.

Or they kept the court officials out because they needed a respite from that extra arrogant attorney that pretty much everyone wanted to punch in the neck. He was lucky they closed the door. They might have been lucky, too, since there were many people who worked for the court, who protected the staff and who carried pistols with permission and legal ammo. The court guards might not defend that extra arrogant attorney, though. He was just that vilely arrogant.

On this day a man was called in by the bailiff. The man was very tall and skinny. He was likely in his early sixties and wore a straw hat with a bright sash above the brim. This was only two days after jury duty had been canceled because of a foot of snow. It must have been his good hat.

He abruptly pulled his arm away from an imaginary hand on his elbow. He glared at the officer of the court who restrained him with a raised brow. He reluctantly agreed that he would tell the truth and said he understood that he was under oath and the penalties for being untruthful.

“I don’t even know why“–he hissed the why–“you all bring me all in here,” came from beneath his chin. He wanted to say it much louder but his better angels were in control.

The jurors knew that this wasn’t about him. A Grand Jury rarely hears from the accused. They knew that he was a witness. He was to give his sworn testimony for the record. This man was a piece in someone else’s puzzle. A puzzle he wanted no part of.

He crossed his long legs and his alligator pressed shoe bounced up and down. He was wearing a tropical shirt, too.

The lawyer asked him about a certain day and what he was doing. He explained that he was just a common guy, trying to make a few bucks. But that wasn’t the question.

It turned out that the man was providing rides for hire in his neighborhood. This was fifteen years before Uber.

He had a big boat of a white Cadillac that he used to squire people on their errands. On the day in question, he was taking a customer to go and get some scrimps.

“Some what?” said the lawyer.

“Some SCRIMPS!” the man shout-snarled. “And why you come and have to bother me about it? I’m just going to get me some scrimps down at the waterfront and someone going with me.”

The case was about the someone with him. And the police arrested him for driving an illegal cab so that he’d talk. But he was just mad.

“I don’t care that you come and get me. Why don’t you just leave it between you and me?” he complained.

“Was that your car?”

“No. You know it won’t my car. I done gave you the registration. But why you gotta go and tell her? Now she won’t let me drive no more.”

“Who’s car were you driving?”

“It’s my wife’s car. But you didn’t need tell her. Now I got her on me and she hid her key. And I’m just going to get some scrimps. It ain’t necessary for her to be called. We coulda just talked about this like some men.”

He really didn’t know much of anything about his partner in scrimps. But he was outraged at the setup and the domestic discord all drummed up, “over nothin.”

He unfolded his long legs, readjusted his straw fedora and walked out. The attorney and bailiff followed him. The foreman almost ran to the door to close it. And Panel 3–made up of an almost perfect D.C. cross section of race, education, income and age–broke into belly laughs, and guffaws, and giggles, and snickers, and shouts, and questions about winter fashion, and yearnings to meet his wife, and chants of scrimps.

All immediately agreed that they would order scrimps for lunch on Friday. It was a unanimous vote. This Panel was a team.